That first run did not go quite as I’d hoped.

Naively, perhaps, I believed with all my might that I’d fly directly from air cast into running.

“I’ll average about 5 miles a day by the time I come back into new year,” I told several folks.

Straining the crap out of the ligaments and tendons atop left foot, the fifth metatarsal now healed, but dragging foot along.

Thankfully, I was able to do cardio again so thereafter first run, I worked on elliptical & bike in Mom’s gym in Kentucky.

Limping around, I was trying to walk as normally as possible but it took full mindfulness to even begin to make that happen and I was still only about 70% with a normal gait…

…until around five days ago.

8 days ago, I saw John again. He’s a Chinese chiropractor with a lot of interesting ideas about neuroscience. He works with pro/semi-pro boxers and first he gave me a hip adjustment. In two months of air cast, my left hip & leg had adjusted to the boot and evolved to be “3 inches higher” than right leg, John said.

Check before & after pics below. First pic, before hip adjustment.

3 inches probably an exaggerated number, but clearly imbalanced. And note new bout of swelling in left heel due to “trauma” of walking again–and running too soon.

Post-hip adjustment, which took all of about 20 seconds per hip: 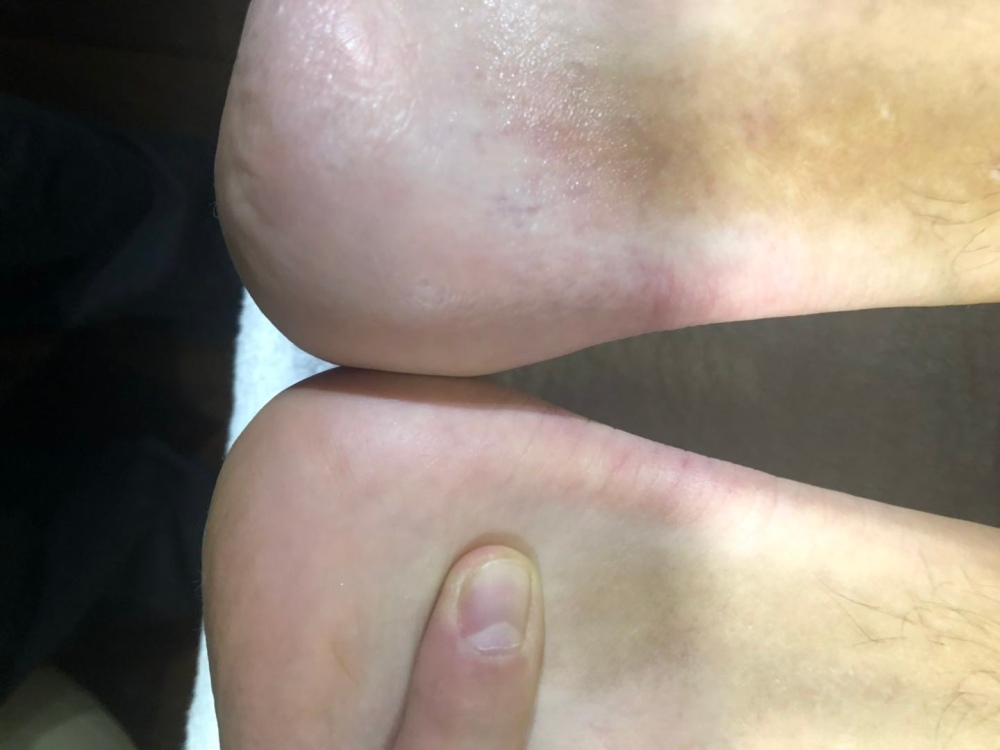 Just as importantly, John hooked on the electrodes, then jolted me up with electricity. My brain had severed communications with my foot muscles, thereby leading to more limping along.

Very briefly, he jolted my foot. He spent about 15-20 minutes electrifying my hip-leg muscles. As this electro-shock therapy, as I call it, surged through me, I did a series of 20 leg raises, several reps per jolt, short pause between jolts.

This good pain did the trick.

I walked out of John’s place renewed.

It was quite remarkable.

Concurrently, I self-diagnosed a complete lack of ankle strength. It was as though my left ankle had become completely frozen–and after just 8 weeks of non-use!

I had completely underestimated the human body’s need for consistent usage.

Truly, I did not use it and lost it.

At least 20 minutes cardio in gym each day, in addition to rotating circuits of leg-arm-back weights.

I hopped side to side yesterday. First time since October 25th.

And I’m ready to run, at least a bit.

Last bout of swelling virtually gone. Left ankle still a bit thicker than right. Was it always so? Not sure.

It’s been a long road back.

But I am determined to be training again in Korea & Japan–beginning on January 28th.