Walking into the salad restaurant, I expected to see folks eating. I did not expect to see an entire indoor skatepark with quarter pipe ramps everywhere.

Skaters darted back and forth in the midst of a fairly conventional mall–with Chinese touches, of course, of cascading waterfalls & fake monkeys clinging to fake palm trees–as spectators ate salad nearby, rap music blasting. 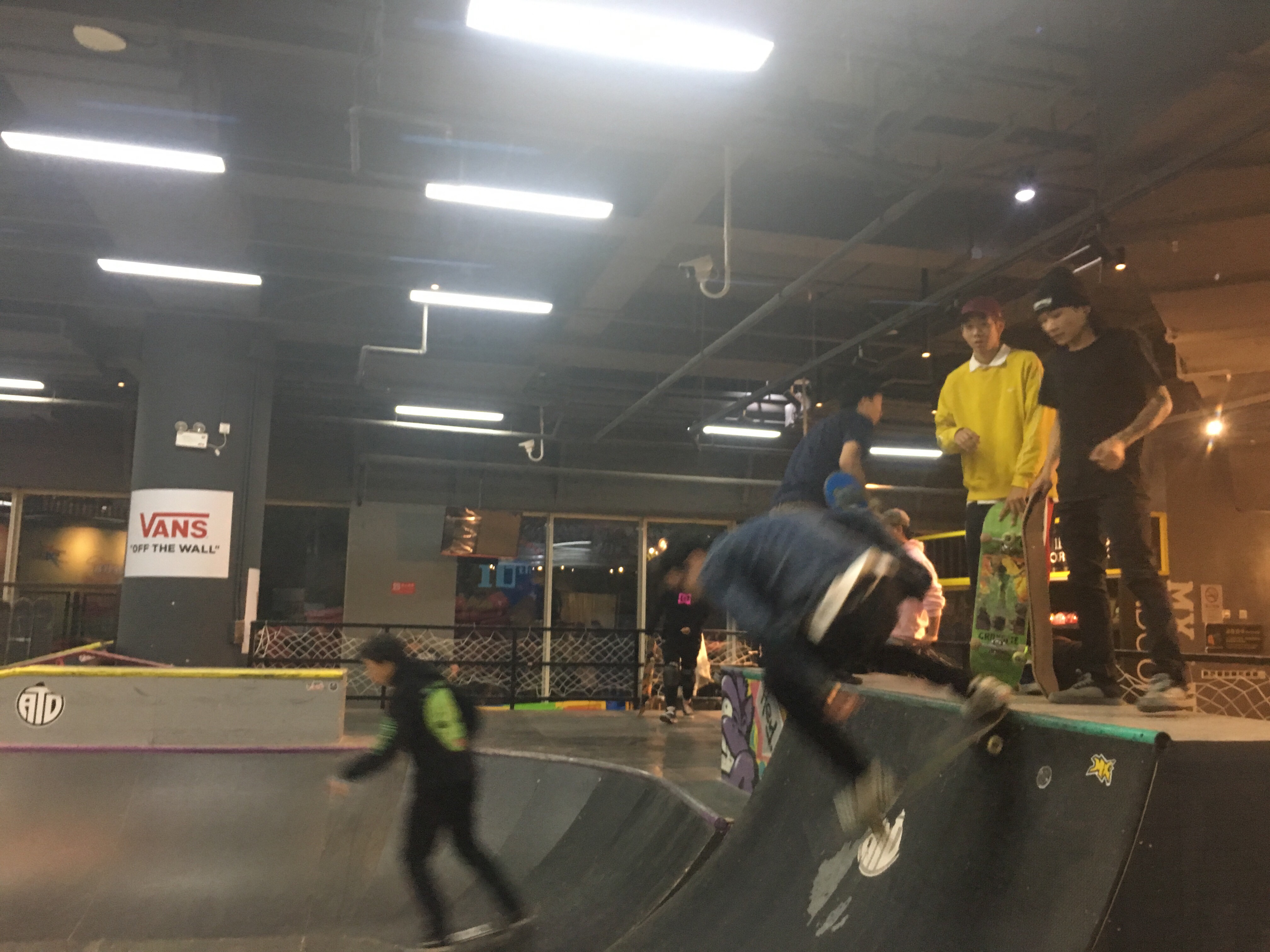 Jessica & I had just walked over from China Art Museum. It was all-systems go for whatever Chinese I know, as she speaks virtually no English. I threw out phrases studied left and right, hoping it would make sense. 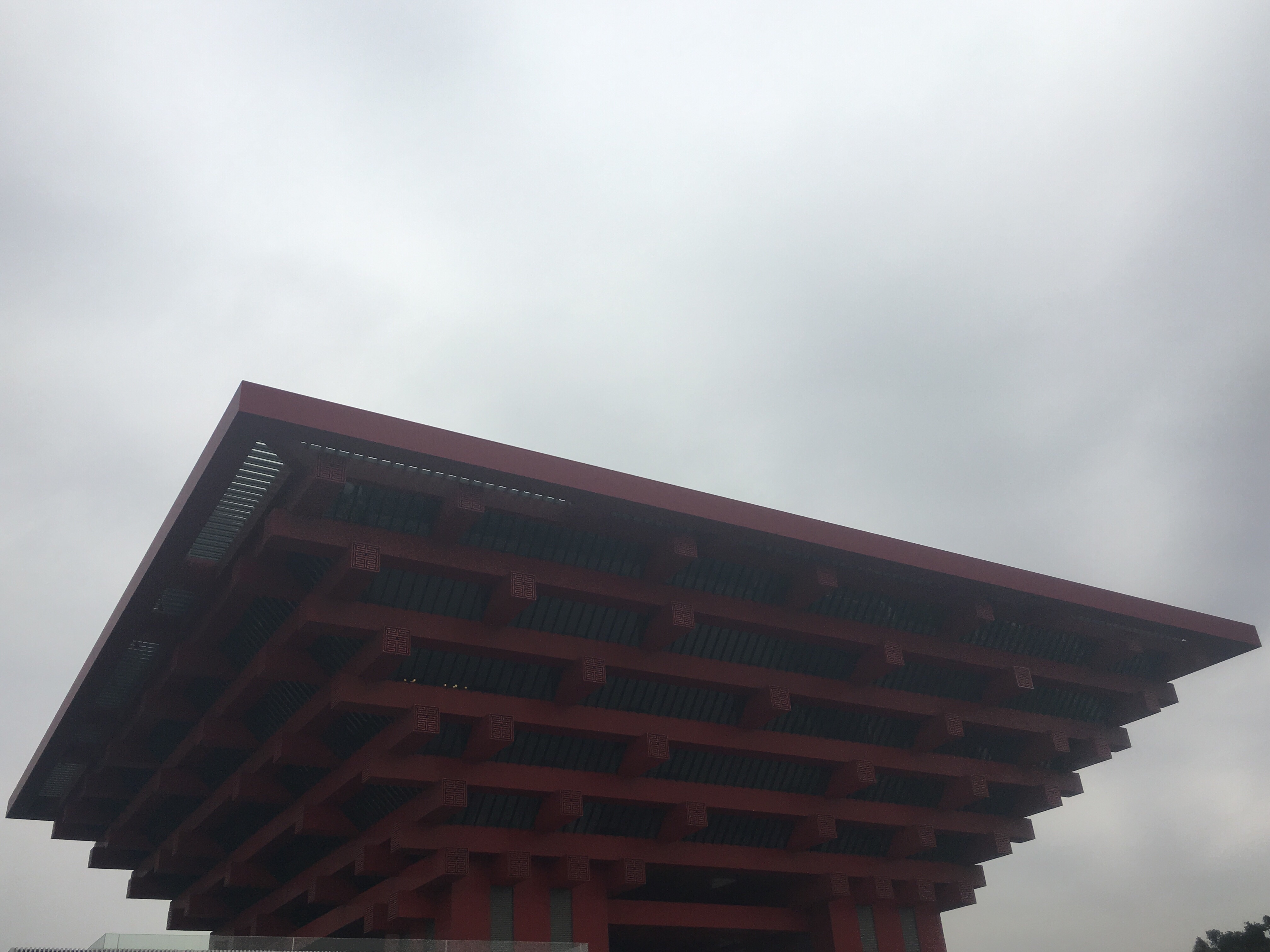 Between this evening and last Friday, I startled myself each time I reflected upon this: “I am on dates…in-Shanghai-China.”

And YaoYao wants me to come by her place at 10am the next morning–on a Sunday, today.

She knew I was running early at Century Park. I only got about 6.5 hours sleep before trekking out to meet Vegan Runners in the Park. It was about 58 degrees but we all had to put on the requisite blue sticky patches over our belly buttons.

One thing I’m learning is how fixated Chinese folks are with keeping their body temperatures just so. They are literally “scared” of the cold getting into them, upsetting their body’s balance and blood flow (“scared” was the word used by a friend this morning).

The sticky patch would ostensibly help keep heat in our bodies.

We then cranked out 20km before vegan volunteers fed me two types of tea, a bean porridge bowl–as I stood in the park–grapes, bread with jelly. Quite remarkable, having a vegan fueling station for each 5k loop around Century.

Next, I rushed off to the subway and traveled a short ways to meet YaoYao. She met me outside the train station near her apartment. Her waist-length hair is amazing; startling me again as it did when I first got her contact info. last Sunday at the top of Earth’s second tallest building.

She is a fireball of energy. Walks fast. Talks fast. Tower runner. Marathoner. Constantly on and off her phone. Always moving.

She speaks incredibly quickly in Chinese with a seemingly different accent. And she speaks no English whatsoever (except once she said “OK” and “bye.” The latter word, however, has now been assimilated into the Chinese language.).

I had no idea what was going to transpire. Admittedly, thoughts of a shower danced in my head.

Here I go—into the apartment of a beautiful woman I’ve met once before. 10:30am Sunday.

I am in China.

Walking in, I take off my shoes and quickly do my best to subdue the sweaty ferment–terrible, really. YaoYao hands me a pair of slippers. A small kitchen ahead with a glass door. A woman inside is cooking.

Okay, we are not alone.

I’m led into the bathroom to take a shower. Pretty nice shower. Weird how the mops are kept in the corner of it. But clean. I hear Y and the other lady talking through a partially opened window as I shower.

All cleaned up, I come out into a dining room. On the wall above the kitchen table is a close up photo of a woman squeezing another woman’s bare nipple. Milk is spraying out.

What in the heck?!

Other signs are affixed around the walls. An open door leads to a bedroom with several beds. YaoYao brings me into her bedroom, warm lighting, small rolling chair.

Okay. I am in a woman’s bedroom.

Flashes of being 16 years old.

Y gives me 2 bananas, a big bag of almonds, some sweet walnut thing. Then, she mixes me up a protein drink. She has a multitude of protein powder containers lining her dresser. Contentedly, I sit, wondering what may transpire. I still have no idea why she wanted me here at 10am. Just to shower (alone, mind you)?

Y refuses to sit; constantly back & forth between bedroom and kitchen. Phone buzzing. Pick it up, put it down. Pick it up.

We speak some–my Chinese phrases rise, and break. But she seems to understand most of my meaning.

The Ayi–helper–is cooking it up. I did not expect a meal. However, Y leads me out to the dining room. 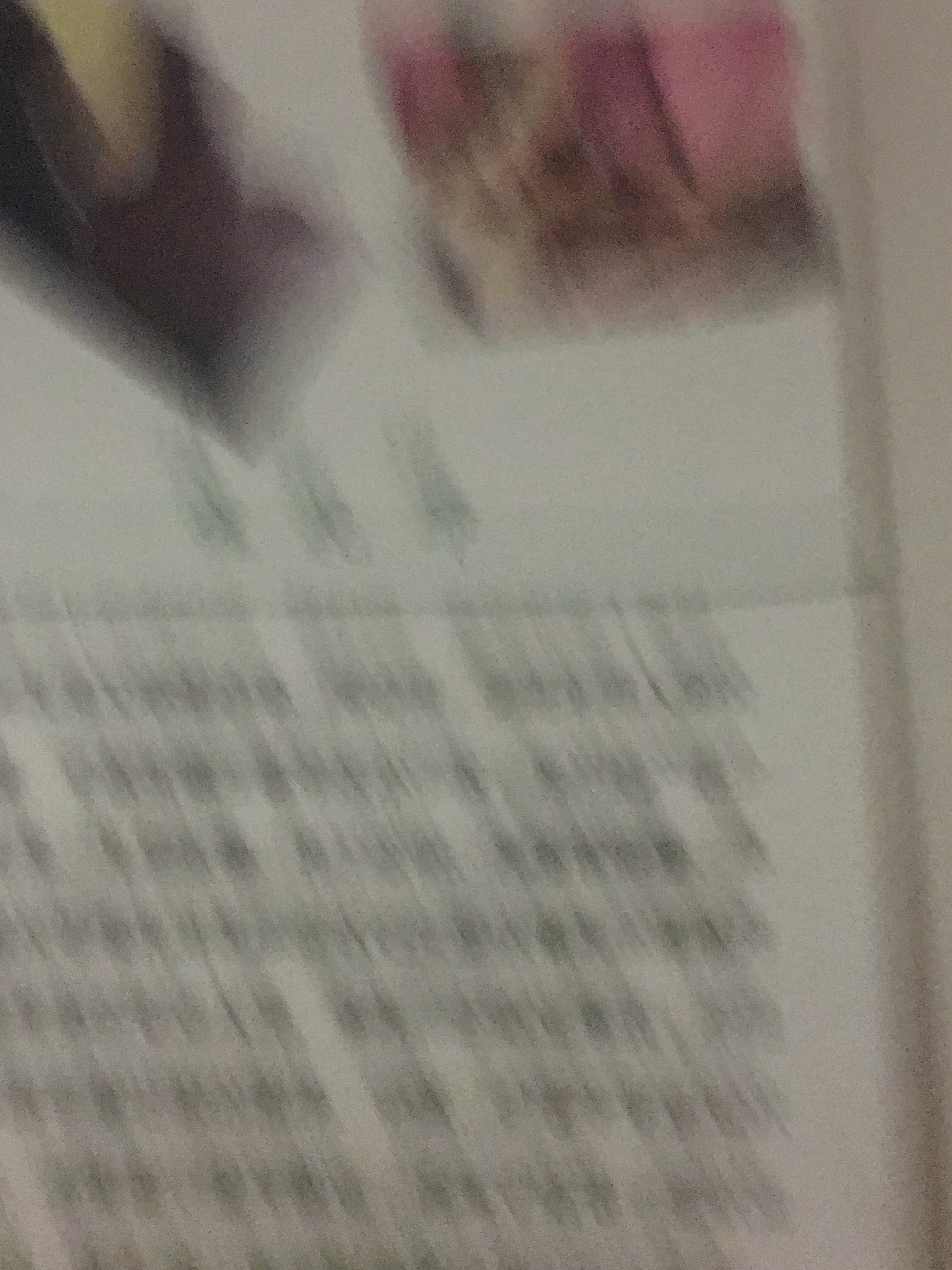 [Realized much later my attempt at getting photo of nipple had failed.]

3 place settings. We each have a small bowl of white rice, a small plate & bamboo chopsticks.

Y & I take a photo together. I place an arm along her lower back, feeling the rush of chemical bonds aligning in separate beings.

Suddenly, the foods begin coming out. As they do in China, it’s one after the other and you never really know when it will stop.

An unusual green vegetable dish. Slices of tofu & celery on another plate. Snow pea plate. We begin eating. The Ayi then brings out steamed pumpkin. Very nice, hope that’s oil and not butter.

The Ayi joins us. At one point, she attempts to translate something Y is telling me. I have no idea what is being said. The Ayi speaks a couple sentences of English.

Cellphone translation tools are whipped out by all. Turns out, Y is inviting me–serious or no?–to travel with her to Chengdu, a four hour plane ride away.

Soon, the Ayi is asking me–via broken English & translation device–if I “trust” in Jesus. Many Americans have asked me this over the years, but normally they are Christians themselves.

I say “yes,” half-expecting the Ayi to agree and say she’s Christian. Instead, she seems amazed. “Ahhhhhh.” Not sure quite what to make of this, she seems perplexed.

Even now, Christianity seems to loom small here. I still have seen only two churches in this city of 24.5 million. Granted, there are underground churches as well, in various homes and perhaps other places. But it is shocking to see so few outward signs of Christianity here.

[one sees more outward examples of Buddhism and Buddhist temples]

Oh! Jacket’s on. YaoYao’s getting ready to go somewhere. Nothing has been said to me. I pick up on the clue and begin getting my bags together. No idea where we’re going.

After several minutes of walking out with her and translating via phones, I realize she has an appointment somewhere. Apparently, I am going with her in the car, which will later drop me off at home.

She adamantly refuses to let me pay or to even transfer–We Chat–money to her.

We soon jump into the back of a very comfortable black sedan. New, clean & warm interior.We’re sitting way too far apart.

I come closer. Soon, I am compelled:

She nods lightly. A woman of few words. My right arm drapes across her shoulder. We sit tightly, her amazingly long hair a siren song to me.

My left hand touches her left sleeve. Her hand opens. My hand clutches hers.

The driver carries us through valleys of skyscrapers, out into a future full of mystery.