Then I knew we were close to North Korea–though still several hours by high speed train.

Here’s what you see everywhere in Seoul’s subway stations: 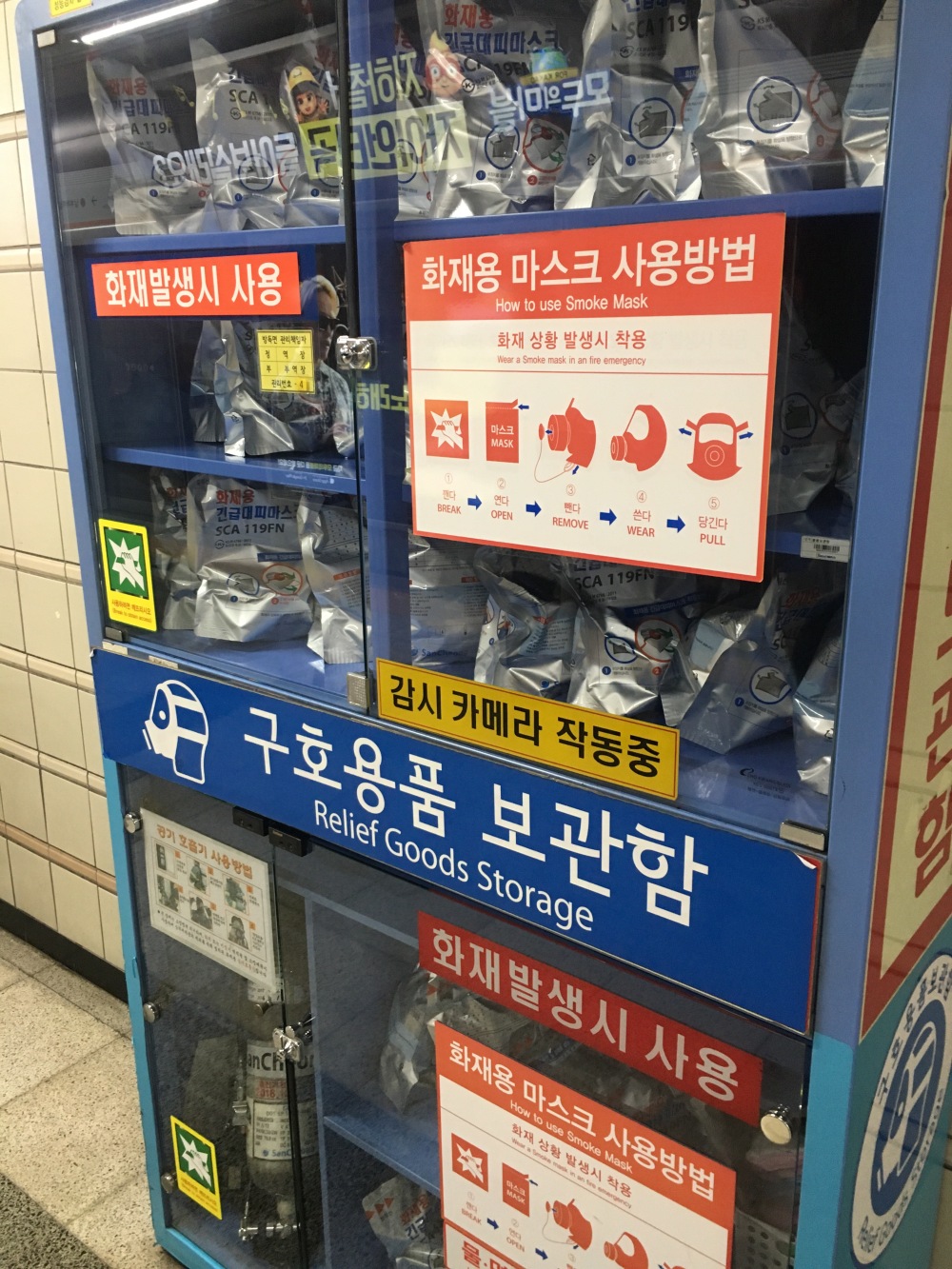 A Korean colleague of mine at school first planted the seed of Korea in my head when she told me I could take a ferry from Fukuoka, Japan–where I was already planning to visit–to Busan. Then another Korean colleague told me about the high speed KTX train from Busan to Seoul. The next thing you know, I’m booking the most “elite” DMZ tour; one to the Joint Security Area (JSA).

One requirement was sending a scan of my passport in advance, for United Nations clearance. There was also a litany of warnings and dress code requirements, including no torn jeans, no sandals, no military garb of any type. No bags of any type allowed, no gestures or attempting to talk with soldiers and photographs only when explicitly told it was okay.

I barely made the tour. My e mail confirmation said meet at the President Hotel at 0850, depart at 0910. At the last second, I decided to overshoot the hotel and grab a green tea from a 7 11 down the block. Admittedly, I also was distracted by a Korean woman heading to work in very sexy heels.

Anyway, I rolled up in front of the President at 0856. All I had to do was walk in lobby, then take elevator to 7th floor. Instead, a smallish woman is standing in front of the hotel steps with a clipboard.

“There is your bus,” she pointed out to me.

At that exact moment, the large charter bus pulled out and away; another cog in the machine if Seoul rush hour traffic.

The lady screamed at the bus to stop. It did not.

My new savior began shouting a stream of Korean into her handheld radio as she told me to come with her.

We began sprinting down the sidewalk along Euljiro Road. She’s screaming repeatedly into her radio; I’m trying to maintain Zen focus and not worry about the possibility of my strained gluteus minimus/medius snapping apart.

The bus pauses at a light after about 200 meters. We’re yelling towards it. Then it pulls off again, makes a left and I feel my DMZ dreams slipping away.

Just then, my savior locks in someone via radio signal and we see the bus pull off to the curb of the next major road ahead. We both rush across the intersection and I thank my friend as I jump sweating and amped up into a dead silent bus filled with about 45 Japanese tourists and 3 Germans. Oh, the Germans. They are hardy travelers, indeed.

I am certain more than one of these expert travelers thought at that moment: “Who does this asshole think he is?”

Along a regular highway within just a few miles of the center of the world’s second largest city, I was not surprised to find this, and yet, it makes it no less surprising–jarring–to actually see it up close: 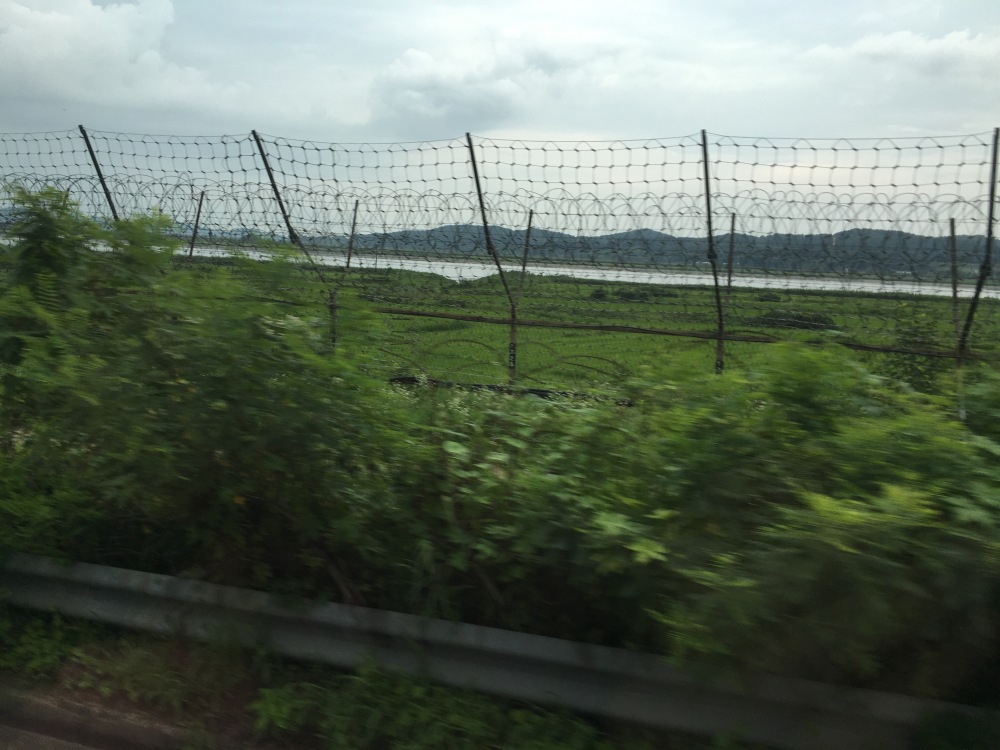 These guard towers are placed about every 200 meters with concertina wire lining the river banks on both sides for as far as the eye can see, then farther.

As we drove further north, we caught our first glimpses of North Korean geography. Mountains in background below are in North Korea…

The first passport check was after our bus had to drive slowly around barricades placed at deliberately awkward angles and our bus was cleared at a checkpoint. At second checkpoint, a Republic of Korea (ROK) soldier came into the bus and walked up to each one of us to give s once over of passports.

Next, at a third checkpoint, deeper than any other tour on earth gets to go without coming in directly from the North (those rare tours do exist and pique my adventurous spirit), another ROK soldier comes aboard the bus with a manifest of each passengers name and nationality (and who knows what else).  He checks each and every passport with a more discerning eye, then stays on board with us as an official military escort.

We have arrived at Camp Bonifas, officially within the DMZ ( Demilitarized Zone) which houses an United Nations Command Support Group.

A small camp with bucolic narrow winding roads, a small Christian chapel, a little soccer field with artificial turf and even a bank outpost with ATM.

It all seems like fun and games until one really thinks about why this is all the way it is and why this tour exists: we have entered an official, active war zone. A relic of the never ended Korean War of 1950-1953. No armistice was ever signed and developments in recent months and years have only confirmed what a powder keg this region is. 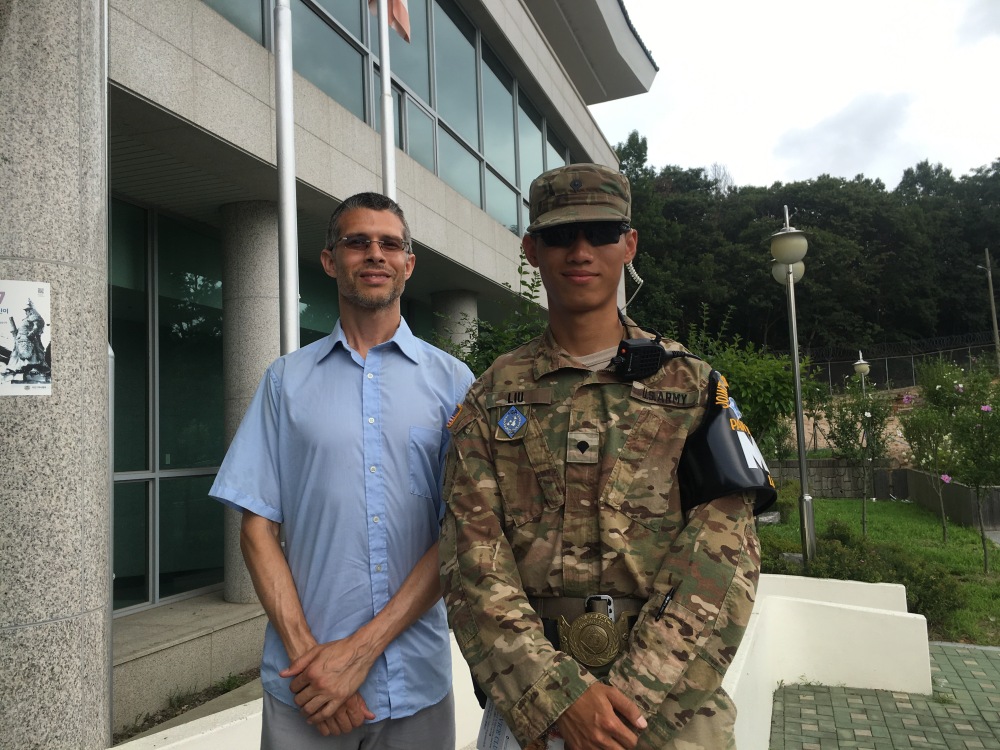 Within Camp Bonifas area I met a United States Army soldier who thanked my father for his former service within the DMZ back in 1987.

“Thank you, sir, for your service,” I told him.